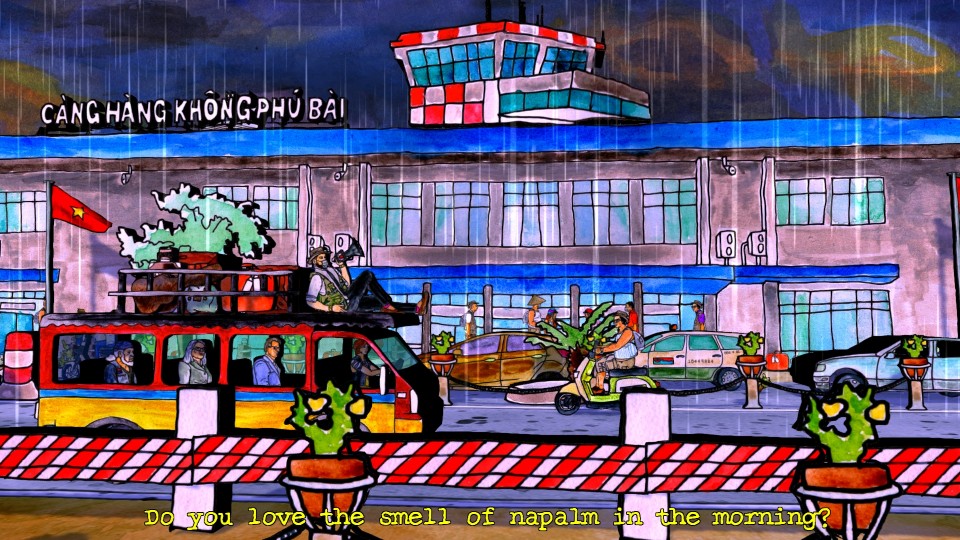 Vietnam Romance is a side-scrolling action adventure game. The narrative follows the Journey of four war memorabilia collectors on a private collecting tour put on by the mysterious “Vietnam Romance” company. The gameplay involves driving, collecting, sight seeing, tunnel running, sky painting, smoking, gambling, karaoke, psychological operations, hunting looting and other adventures. Vietnam Romance, recreates and interrogates the fictionalized history of the Vietnam War and its culturally commodified remains; it is a peculiarly American memory-trip, one in which the legacy of a gruesome war has become indistinguishable from pleasurable, if mythic-tragic, entertainments. The game includes a smattering of mashed-up references to Vietnam War cultural artifacts primarily from film but also from literature, comics, popular music, war memorabilia, and adventure tourism.

Notes: All of the “art” is originally watercolors on paper. I am sending 4 sample scenes here (I have 8 scenes so far) - some are more fleshed out than others (scene 7 for instance is very rough but I wanted to include it for variety as it is a repeatable side adventure “flashback”. The final goal is for all the scenes to be voice-acted and interlinked through inventory and story arc. I do imagine the game taking on an episodic release model - where several scenes are published at a time.