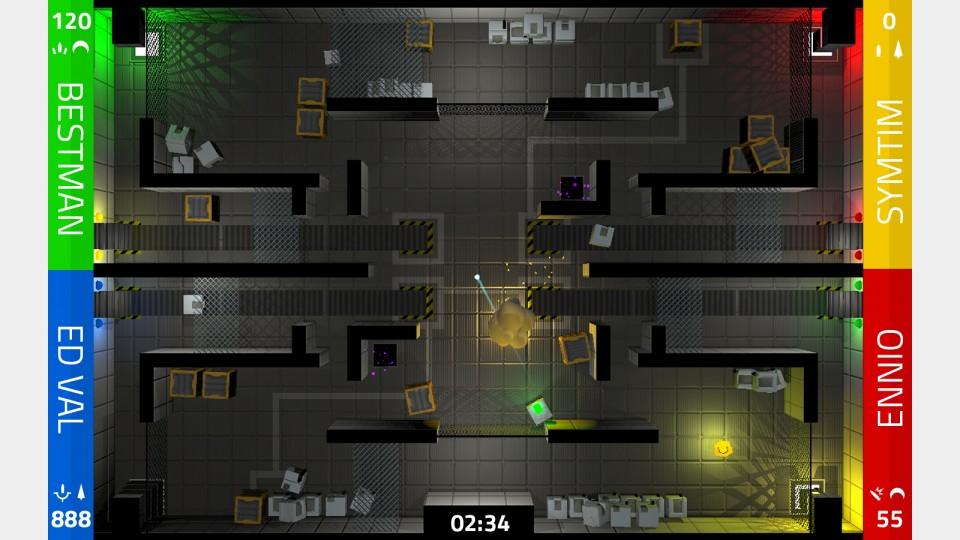 Fatal Error is a 4-player ‘capture-the-flag’ game. Each player controls a robot, and has to fight the other three to get hold of a gem, and bring it back to its base to score points. The fighting is conducted with a machine gun and an energy sword (one hit kill), and killing other players gives point, but quite less compared to bringing back the gem to the base, which is the main goal of the game.

In addition to this, the game’s core concept is to have hidden information and have the players deceive each other, without being online or having a split screen. In the current prototype only one of these mechanics is implemented, but the final game will have more (3, or 4).

The one implemented is being called ‘teleport’: on this map, 4 conveyor belts placed in strategic position continuously output a stream of disabled cube robots, which are actually identical to the players’ robots, but compacted/closed. The players can enter one of the 2 black holes, and press a face button (X/Y/A/B) on the controller to come out from one of the pipes and onto a conveyor belt, just like the other cubes. They can’t move, but at any moment they can open themselves by swinging the sword, and possibly killing nearby enemies.

Since the player presses the button, only he knows which crate he is on-screen, while the others are left to guess. The current maps are built around this mechanic, by forcing the returning robots near the conveyor belts, thus providing many chances for ambushes.