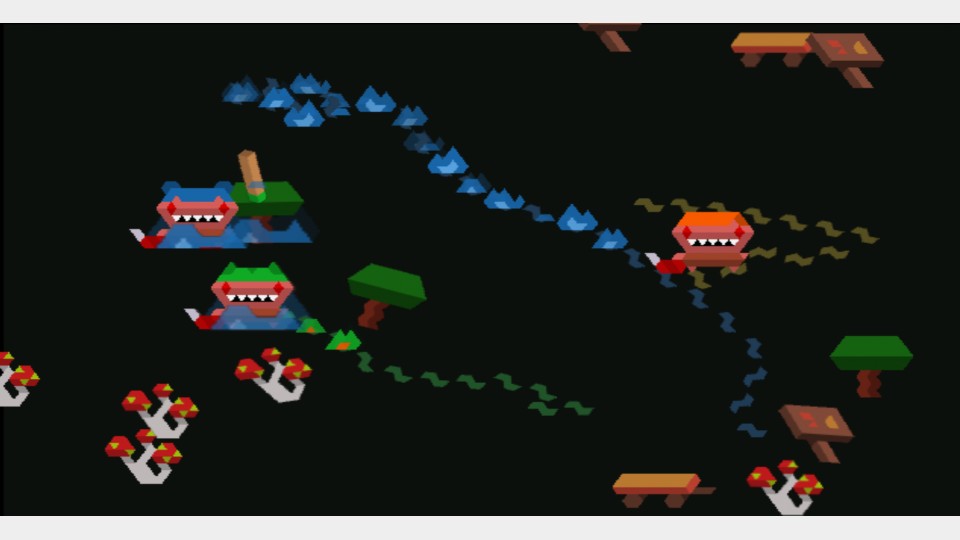 Four kobolds go on a rampage with only one thing in mind: everything has to burn! The players are equipped with gasoline tanks and one matchstick each. They leave behind a trail of gas, trying to connect as many of the randomly placed burnable objects, and then throw their match to set the world ablaze. They have to act fast, because the round ends as soon as all matches have been trown, or all the players have burned to death. When the round is over, points are given for every object or person each player has burnt (the fire is tinted in player colors to determine who's gas was responsible for each pyre). The goal is to become Masterbrännare (master of burning). The joy of the game comes from competitive play, as well as the visual beauty of seeing the inferno one has created. For all destruction is also a creative act! The game is presented in vividly colored trixel-art by Kjell Håftén, complementing the dark undertones and emphasizing playfullness. And it features a soundtrack by the swedish punk band Budets Bärare. The manic vocals of Emily Handberg are accompanied by drums and organ, embracing the primordial lust for death and destruction. Alla Ska Brinna is the product of a spontanious game jam during the Tillbakakaka festival in Säljeryd, Sweden. It was hacked together on the dancefloor by coder Jacob "Eelfroth" Bauer, using the Processing API.